THE FRIEND by Sigrid Nunez 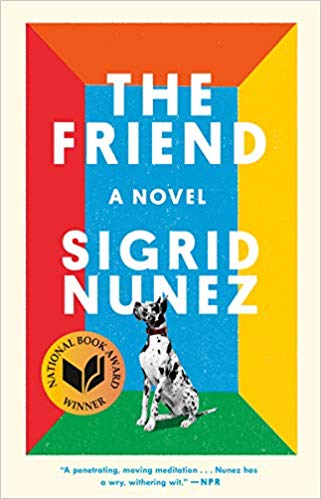 This review is reprinted from my animal advocacy blog, aheartforshelterdogs.com

Sigrid Nunez’s novel The Friend won the National Book Award for fiction in 2018, despite breaking nearly every rule that fiction writers today are advised to hew to: It’s sometimes rambling, it has no linear plot, it’s about the rarefied world of Writers, it’s New York-centric, it reads more like a journal or a memoir than a novel, not much is shown and much is told.

But, it’s brilliant and moving. And oh, that dog!

The narrator is a middle-aged woman, a college writing professor and writer, living in New York City. Her best friend has died, a suicide. Most of the book reads like a letter from Narrator to “You,” her deceased friend. It quickly becomes clear to the reader, even if the narrator dances around fully acknowledging it, that he was more than a friend; he was her teacher and mentor and her lifelong love. They only made love once, in their youth, when he proposed it as a sort of experiment and then never cared to repeat it. How that must have hurt her as he turned his amorous attention to numerous affairs with students and so many girlfriends (plus three wives) that someone joked at his funeral that the large room would not have held them all.

Wife Number Three (no human being, other than famous literary figures, has a name in this book) invites Narrator out for lunch one day and quickly gets to the point: her late husband wanted Narrator to take his dog. The dog is an enormous Great Dane and he does have a name: Apollo.

Narrator balks at first: her apartment is only 500 square feet, and, furthermore, her building doesn’t allow dogs. But in the end she acquiesces, telling herself – and the disapproving building superintendent – that it’s only temporary.

Apollo sees her through her grief and loneliness, and she sees him through his equally powerful, though mysterious, bereavement: “[Animals] don’t commit suicide. They don’t weep. But they can and do fall to pieces. They can and do have their hearts broken. They can and do lose their minds.” She is determined that she and Apollo will stay together, even if they have to find a new place to live. (As it turns out, her therapist helps her get Apollo certified as an emotional support dog and so he can stay.)

Apollo becomes the love of her life. I don’t want to create the misleading impression that this is solely, or even primarily, a dog book — it’s equally about the process of grieving; the dire state of literature (“The rise of self-publishing was a catastrophe, you said. It was the death of literature”; the maddening self-absorption of today’s students (“Student A is frustrated that the program requires so many reading courses: I don’t want to read what other people write. I want people to read what I write”; the ever-more-unrewarding ordeal of being a writer today.

But, though they occupy only maybe a quarter of the book, the passages about Apollo are wonderful. Unforgettable:

“Poke. Woof. I turn my head. Apollo’s gaze is deep, his mismatched ears look sharp as razors. He licks my face and does the cha-cha thing again. He wags his tail, and for the thousandth time I think how frustrating it must be for a dog: the endless trouble of making yourself understood to a human.”

And what dog lover hasn’t felt this way?: “I too have found myself so eager to get home to him that I have jumped in a cab rather than take the train. I too sing with joy at the thought of seeing him, and for sure, this love is not like any love I’ve ever felt before.”

If you consult the website doesthedogdie.com, you will know what you’re in for, which, in truth, we already knew when Nunez told us that Great Danes are short-lived and that Apollo is already well on in years. This is not a feel-good book with a happy ending.

But it is stunning in its portrayal of the hard-won triumph of love over loss. All of us face that challenge at some point; we dog lovers may go through it multiple times. What makes it worth it is, as Nunez writes, “Animals are not expelled with us from Paradise. There they remain, untroubled by such complications as the separation of body and soul, and it’s through our love and friendship with them that we are able to reconnect to Paradise, albeit by just a thread.”