From Wikipedia: "Used loosely, 'bardo' is the state of existence intermediate between two lives on earth. According to Tibetan tradition, after death and before one's next birth, when one's consciousness is not connected with a physical body, one experiences a variety of phenomena. These usually follow a particular sequence of degeneration from, just after death, the clearest experiences of reality of which one is spiritually capable, and then proceeding to terrifying hallucinations that arise from the impulses of one's previous unskillful actions. For the prepared and appropriately trained individuals the bardo offers a state of great opportunity for liberation, since transcendental insight may arise with the direct experience of reality, while for others it can become a place of danger as the karmically created hallucinations can impel one into a less than desirable rebirth."

Formally inventive, the narrative is pieced together from short sentences or paragraphs written or uttered by different people. The factual account of the fatal illness and death of young Willie Lincoln and his parents' grief is composed of snippets from news sources and diaries of the day. The description of Lincoln's visit to his dead son in the graveyard on the night after the boy's interment, as well as the observations of the chorus of ghosts who witness this visit and also speak of their own experiences, are of course highly imaginative.

I read this with great interest, because I am also writing a book set in Civil War times, about a young soldier killed in battle who is unable to go to his rest because he feels compelled to fulfill a mission left incomplete at his death. Saunders' metaphysics of death is complicated and I struggled to understand it. Here is what I came up with:

The souls of the dead linger restlessly around their bodies. By day they repose in their (progressively decaying) bodies; by night they can travel around and even enter the living, largely undetected though they can exert an influence on the thoughts of the living. (This is key to undersranding the ending.)

These dead souls have not accepted the fact of their demise. Instead they cling to the illusion that they are just ill; they refer to their bodies as their sick-forms, their graves as their sick-holes and sick-mounds, and their coffins as their sick -boxes. The danger of remaining in this state of denial for too long is that they become corrupted; putrid swarms of miniaturized long-dead souls (yes, it does get a bit thick) engulf and immobilize them, subjecting them to live out horrific hallucinations. This process is especially rapid when the dead person is young, like Willie Lincoln.

To avoid this fate, the dead person needs to accept the reality of his condition--and, when approached by one of the swarm of angels who regularly visit the graveyard, assent to moving to the next phase of their soul's existence. This transition occurs as a sort of explosion: a "matterlightblooming phenomenon" that vaporizes the person's body and removes his spirit from the world. Where it goes, Saunders does not specify. But he presents it as a necessary and desirable progression.

The confusion for me came from the fact that these angels do not seem to be benevolent; they appear to each person in the most irresistible guise imaginable, sometimes as wanton sexual tempters, to seduce the dead person into coming with them.

Will young Willie Lincoln's spirit escape the fate of quick corruption? Can his father ever recover from his grief, to meet the heavy responsibilities of saving the Union? What about the other spirits whom we come to know --3 in particular depth --in the course of this agitated night? Will they be saved?

I admired the book's audacity but didn't feel it entirely worked. Sometimes the choppy banter of the spirit characters became tedious, and seemed trivial. Many of them are sex-obsessed to a degree that was wearisome to me.

The parts that focused on Lincoln, however, were touching and credible. His liberation at the end comes from a surprising source that is highly satisfying. 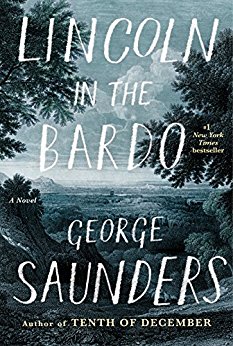